Sustainability is the buzz word as climate change is likely to impact life on our planet. Can mankind come up with innovative ideas to combat the crisis which is at hand? Swiss watchmaker Victorinox Swiss Army strongly thinks one can. That’s the spirit behind its ‘Time to Care’ initiative, aimed at promoting sustainable solutions even further – right to the next generation Download The Ball Flip.

Swiss Army also has a long-standing heritage of spearheading environmental responsibility and is a pioneer in energy conservation and recycling. To address the growing concerns of depleting natural resources and climatic change, they have been championing the need for creating sustainable design solutions section tv. Its award-winning Green Shield program, initiated by Victorinox in its Ibach-Schwyz headquarters, is a model of sustainable activism. Hence, to further give direction to the cause, Time to Care Sustainable Project was born.

The Time to Care Sustainable project is a two-part project aimed at stimulating new ideas that promote responsible and sustainable design iPhone Google Drive video. It also serves as a platform that showcases the work of some of the world’s most interesting sustainable innovators and provides them an opportunity to develop their own ideas on sustainability. The first part of the project was the “The Spirit of Innovation and Sustainability”, a travelling photo exhibition that was unveiled at BaselWorld 2011 라즈베리안 다운로드.

Students of top design schools in the world were invited to submit projects about sustainable design to an international jury of designers and Victorinox Swiss Army executives at Time to Care micro-site beginning April 2011 스마트폰 컬러링 다운로드. Some of the  participating design schools were the Royal College of Art (UK); Facultad de Arquitectura UNAM (Mexico); Domus Academy (Italy); Tongji University (Shanghai), the ECAL (CH) and Maeer’s Mit Institute Of Design.

In early January 2011, students from the world’s top design schools were invited to submit sustainable design projects to an international jury of 15 noted designers and engineers 반란주식회사 다운로드. The response was extraordinary:a total of 39 projects were submitted. Among those, seven projects were selected as being the most innovative and in line with a sustainable future.

The jury selected the top seven entries which were then featured on the Time to Care micro-site from June 1 until August 31 and the public was invited to vote for their favourite project 스타워즈 7 다운로드. As an extra incentive, Victorinox Swiss Army organised a fortnightly lucky draw to give an Alliance watch every two weeks to visitors who voted for a project. It received over 80,000 votes and the top three projects were selected by the public.

The winning design was submitted by Hyderabad’s Anurag Sarda, an alumnus of Pune’s MIT Institute of  Design,who is presently doing an internship at Wild Design, Germany daum 영화 다운로드. The third place was taken by Dan Watson of UK and the second place was won jointly by Oscar Gonzales and Cristian Coreuera of Mexico.

Victorinox Swiss Army will fund, support and work closely with these top three project design teams for a period of two years in order to make sure these projects become a reality. Victorinox CEO, Alexander Bennouna says, “Faced with depleting resources and severe climatic changes, sustainability in design is the need of the hour Yeong-long. Innovation is a core value of Victorinox Swiss Army, governing every aspect of our business. With a  long heritage of environmental responsibility and being a pioneer in energy conservation and recycling, Victorinox tries to ensure that every new method, idea and product is oriented towards sustainability. Through ‘Time to Care,’ we are not only spreading the important message of sustainability, but also encouraging its practice by making these award-winning projects a reality.”

Sarda’s project, called LEAF, is a low-maintenance, self-generating water source that uses solar power to produce up to 20lts of drinkable water a day. It may sound like something from a science-fiction novel; LEAF is inspired from a natural leaf that produces dew drops on it. Water is artificially generated by a condensation process. The electricity generated through solar energy helps in cooling the metallic surface on the top of the unit and its temperature is monitored and varied with the help of an electronic circuit. Due to the change in temperature, dew drops are generated on its surface and get collected in an earthern pot, which helps keep the water fresh.The filter has to be  removed from time to time to clean it, but otherwise, you’ve got yourself a low-maintenance structurally solid water generating unit. The LEAF is 18 feet tall and can collect up to 20lts of water in 24 hours.

On winning the award, Anurag Sarda says, “The Victorinox Swiss Army Time to Care Sustainable Design Award has enabled young designers to showcase their talent through innovative sustainable designs. What is special about this initiative is that my efforts will not be restricted to prototypes, but will see the light of day. At the end of my internship, I will be happy to have created something that is sustainable and benefits socitey.” 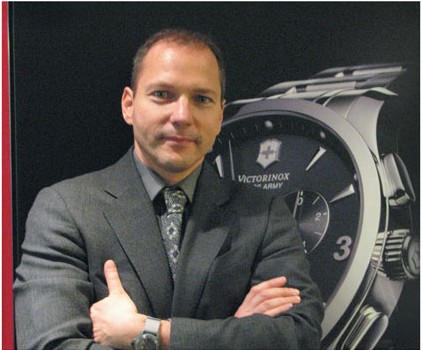