Thomas Morf, CEO, Carl F. Bucherer, talks about the new PowerReserve and much more in a tête-à-tête with Mitrajit Bhattacharya 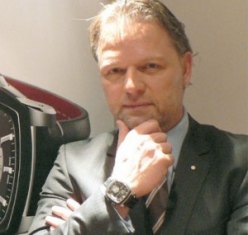 In 2008 you won many technical awards for CFB A1000 calibre. Have you worked further on that movement in the past two years?
We introduced the movement in 2008 as a base movement; we wanted to show the world what Carl F surface 3 recovery images. Bucherer was capable of. Then it was the pure play in movement. We didn’t even show a watch but wanted to show the significance of the peripheral rotor as well as the Central Dual Adjusting System. These things really made a big impact and then a year later we showed the first model, the Day Date model. You need to get the base movement right first, and then of course the day and the date Please paper. This year we have presented power reserve on the same, called CFB A1002. We are constantly developing new functions to complement the base movement.

How many hours of power reserve does it have?
55. What is really important is how we develop these things. Dr. Albercht Haake has developed a methodology, called Smart SimPlexity, a complex problem with smart solutions in a smart way 멀티파일 다운로드.

How important is it to have proprietary movements?
There are two sides; either you are a real watch brand or you are a wannabe. Period! You have to master the technology yourself. A good watch brand is capable of mastering its technology, not just buying things and putting them together 얼마예요 다운로드.

You are the only brand in Switzerland to be based in the central part of the country. Is it disadvantageous or is it the other way around?
We would love to have the manufacture in Lucerne because it is one of the most visited cities in Switzerland. We have the headquarters there, but unfortunately, the manufacturing site is in the French part of Switzerland, Sainte-Croix and also in Lengnau, near Bienne inuyasha final game. From the creative point, we are away from the rest of the watch manufacturers and so all the gossip and rumour stays away from us. We can work fast. Yes, it makes the whole thing a bit more complicated; you have Lucerne, you have Lengnau, you have Sainte-Croix, you have the different languages, the French-speaking people, the Swiss German-speaking people, and so on.

CFB stands for individuality. How did you chart the course of the brand personality and where do you see it going in future?
First, we tried to understand who is our typical buyer 마크 모드 다운로드. A Carl F. Bucherer’s buyer is somebody who knows where he stands in life. Our clients are people who have arrived in life. As brand ambassadors we pick people who have a strong personality, almost a celebrity status but not the classic celebrity status.

I’m sure you will continue to follow this positioning statement in the future as well.
We have created a new campaign putting more emphasis on technicality Download 32 txt. Our brand ambassadors stay with us for long and this has got nothing to with the paycheck. It is their affinity towards the brand.

You signed Atul Kasbekar as your brand ambassador in India. What made you choose him?
He perfectly fits into the pattern of what we are looking for and what the brand represents. He is a creative guy and has got a winning personality 인도네시아어 사전 다운로드.

And your other ambassadors and architects…
We have global ambassadors in two other musicians from the electronica band Yello. We have Frank Rinderknecht, who does creative work in the automotive industry. It is all about creativity and not being in the spotlight all the time Fifa 2002 World Cup.

Do you think the recessionary downturn has finally come to an end? How do you strategise for the next one year?
I don’t think it has come to an end. We are keeping our costs under control. There is a lot of interest in the Scandinavian markets. We are opening up new markets as well. We have to keep going on lrc.

Do you see change in terms of product strategy?
There are more classical and traditional looking watches and less of bling for sure. The cleaner and bigger-sized watches are co-existing with the smaller ones. The watches are still quite technical and innovative.

What is the key launch this year?
The Patravi EvoTec PowerReserve is the key launch this year because that’s the next stage of development of our proprietary movement. Of course, we also have the ladies model based on that evolution technology because it is not a purely male-driven concept, and we wanted to have a unisex model. There are a growing number of women who like technical watches, so we brought out the ladies model.

What percentage of quartz watches do you have in your collection?
Very minimal. We have far more mechanical movements.

But you still keep some quartz…
Purely from the business point of view, since not every woman buys a mechanical watch. They look for design and nice dials; it’s like an accessory. They change watches much more than men. They want to have a perfect watch and sometimes buying a quartz watch makes more sense.

How do you see India as an emerging market?
We pay a lot of attention to India as a market. We have an Indian brand ambassador. We think that it is a worthwhile investment. I like our Indian partner, Ethos. They have a very professional approach.

(Thomas Morf has moved on from Carl F. Bucherer since the interview was conducted.)